I just realized I didn't put up any title in the previous post, lol. Guess I was too caught up with the fact that... oh well, that LOTS of things happened, and I was so wrong thinking everything will end soonest. Later yesterday I found my friend(s) commenting on my La Vie en Rose post. Which practically turned me as crazy as one could be, just in case you forget, in the very first paragraph of that post I've written:


Now I just need to pray silently none of my friends read this.

You may say my prayers went unanswered. And honestly, reading these comments from my friend freaked the hell out of me (duh, of course).


There's something not much people know about me, but now I'm gonna let the world know.

Ever heard of something called 'Philophobia'?


Let alone being in a relationship.

I know it's ironic for someone as addicted to anything romance-related as me is afraid of being in love, but oh well, this isn't the first time I face this so...

Okay, I'll talk about this phobia later. Not really the point, although it is in some ways.


on with the story, I was so freaked out when I read my friend commenting, so I decided to just let the guy knows it from me instead of from the gossip, so after contemplating for minutes, I texted him (this is the exact words I sent to him, yes, I wrote him in english)


Look, what am I to you? Are we friends or are we more? For me it's the latter, though I'm still unsure about it.

Anyway, I wrote it in my blog and one of our friends read it which means I'm practically dead.

Geez, why is it always me confessing and not the other way around? Stay friends aren't we?

Aren't I sound so cool? Blunt and bold and a little bit insane?


Guess what he said in his reply? lol. He only said one word,


So I explained that I do, though I'm not in any state of a relationship, I enjoy being with him and I just tell him because I don't want him to know it from his friends instead of me. He answered that he feels the same but choose to take things slowly.


One thing I missed to explain though, that he's not the one and only I have in mind, I love hopping from one guy to another (which isn't a good habit but...), sure I enjoy his company, I love spending time with him and do something I've never thought of before, but there's so much more of the boys world I want to unveil and try.


Anyway, we've known each other's feeling, so is it that kind of open relationship? I don't know. I felt silly when I remember how my romance related stories always end up this way, do you think confessing your feeling to every guys you like is a good thing? lol.


I think I should be thankful that my crushes have a pretty smart mind (remember the best friend?). *phew*


and by the way, I think I miss the best friend. Now it's his turn to do the duty in the village for two months! Two months! Geez, I miss him muchies.


And and and! My brother is coming home today! Well... he's coming this morning, and this night he's coming back to the city he lives in. He's just plain crazy, really. He arrived here 7 in the morning and back there again 7 in the evening? I need more time to snuggle with him and his craziness... 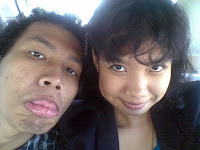 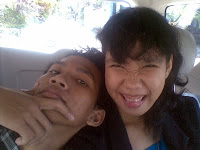 Not enough of our awesomeness?
Fine, I'l give you more. 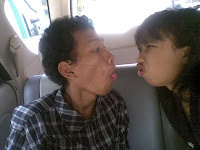 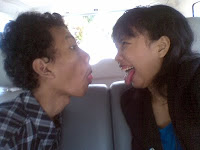 I think he beats me in making faces, haha. He's pro.


And oh, I got my new phone already. Though I've been wanting for a 5530 (and actually still secretly want it now), but I and dad couldn't find it anywhere. So daddy dearest decided to just buy me this E63. Not bad ;D only less stylish, all the facilities I want in 5530 is actually owned by this phone too.

And my internet is BACK! The modem is working properly again! I don't know what happened, I mean, we didn't do anything! Really! Hahaha... I'm so happy!
Quite a long post to sum what happened in two days, isn't it?

edit.
Lol. So most people thought those pictures are of me and the crushies, no he wasn't, that's my dearest little brother there! ;D haha. I checked it and yeah, I didn't even explain who that is o.O my bad, lololol.
about: girl talk, little secrets, moments in life, that guy, the best friend at 5:41 AM Little notes of littletiara