My once upon a time story

Let’s try my writing skill, it’s been a while since the last time I wrote a story, but I need to proof that I am still a literature student after all. The following story will be slightly different from my other blog posts. 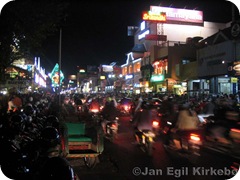 She looked around, Eid1 is around the corner and this very day was weekend. With discount everywhere there was no doubt this place would be so crowded, even without holiday and sales Malioboro2 always is the most crowded place in town. But in spite of everything, there they were, walking (or at least trying to walk) through the sea of people around them.

She sighed secretly, she never had claustrophobia whatsoever, but jam packed people was never really her favorite either. However, she had agreed to accompany him, no, scratch that, actually, she was the one who asked him to go out tonight in the first place. Consequence, consequence.

He continued walking before her, sometimes they made a little conversation, but most of the time they focused on their every step. Too focused that she didn’t realize the time they separated.

She was pretty sure he was walking beside her second ago, then why couldn’t she find him around anymore? Was he playing prank on her? She looked around, convinced herself that he was just hiding somewhere near, where could he possibly hide when there wasn’t even enough space to walk? Also, how could he play prank at this kind of time?

Wait, was he really playing prank on her?

Seconds ticked and she still couldn’t see any sign of him, She stayed a little more second until a realization hit her, no doubt, she was actually lost. Damn. All of a sudden she regretted asking him earlier to carry all her belongings including purse and bags and all, oh, but the cell phone was still in her pocket.

Once again, this time more panic, she looked around. She wouldn’t be able to go home without him, it was dark already and there was no public transportation she could use for her money was all on him. Looking ahead, she noticed the green plaid backpack, it was hers! And the guy with denim jacket? Phew! She found him! Quickly, she ran to his direction, not caring about the other people walking past through her.

He hadn’t seen her yet, his cell phone was in hand, ready to make a call when suddenly she appeared before him, couldn’t decide whether to feel relief or angry, he spontaneously scolded her, “Where the hell were you?!”

“I was lost!” she exclaimed, more like an announcement than anything, and with that he smiled, just like that, they continued to walk. She had learned her lesson decided she should cling to him all the time, so she grabbed her backpack (which he carried) and hold on to it.

He noticed, stared at her for a while before finally questioning, “Why are you holding on to the backpack?”

“Huh?” She answered (or not really), how should she answer it? Because she wanted to stay close to him? Because she couldn’t hold on to his hand instead? “I just don’t want to get lost again,” she finally answered, which rewarded her his smirk. Oh that famous smirk of him, can a smirk be any more adorable?

But she being herself, as soon as they arrived at the store, couldn’t help but sidetracked her eyes to anything more interesting. Quickly she hopped from one rack to another, forgetting that only minutes ago she was lost. When she realized that she couldn’t hear his voice anywhere near her, she started panicking again, damn! Why was she getting distracted so easily?

To her surprise, it didn’t take long to her to find him again; in fact he was there, right behind her. “What? You’re afraid of getting lost again?” He smirked yet again, and she could swear she heard him saying, “don’t worry I’m here,” but maybe that was just her imagination playing with her.

Eventually, she couldn’t sleep easily that night; thinking that he actually cared for her she realized that getting lost never really feel any better.

1 Eid is a celebration for Muslim after fasting month, usually people buy new clothes and all, thus the crowded places and discounts.

2 Malioboro, the most famous, most crowded street in Yogyakarta, you can find heaps and heaps of souvenirs here. They simply sell… well, everything.

Wait, have I told you that the girl in this story is me and the guy is, of course, the best friend? Yes, I was lost the last time we hang out.

And happy Eid Mubarak for every Muslim who celebrates it! :)

about: moments in life, the best friend, words of the brain at 8:43 AM Little notes of littletiara